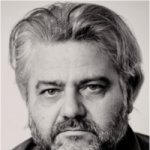 As part of Urban Summer, Bozar, in collaboration with the Pro Velo association, invites you to join in a series of thematic bike rides across Brussels. For this occasion, we asked four artists based in Brussels to imagine a route through the city inspired by their artistic practice and their personal experience, each telling a different story of Brussels. From the Mont des Arts to Tour&Taxis, from Porte de Namur to the Parc du Cinquantenaire, join us to discover the places and the stories told by these artists: Anthea Missy, Anne Paulicevich, Benjamin Tollet and Pascal Verbeken.

With this bike tour Pascal Verbeken will take you on journey from the Mont des Arts to the Canal, where we explore a number of neighbourhoods which are undergoing rapid evolution. The Tour & Taxis site, post-industrial Molenbeek, the garden district of Het Rad/La Roue in Anderlecht, Kuregem and its car trade, and the market at the Abattoirs. Districts with a rich history and which reveal the city's future.

Pascal Verbeken learned to read, write and gaze out of the window in primary-school classes taught by Mr Walter in a railway estate in Ghent. Since 1990, he has been working for publications such as De Standaard, Humo, De Morgen, Knack, Le Vif/L’Express, De Groene Amsterdammer and Wilfried. He has written books and made several documentaries.
Since October 2020, he has been the Chief Editor of the Dutch-language edition of Wilfried mag, the first Belgian magazine using reports and photographic journalism to cover the entire country, and not only the local region and language group. Wilfried is a quarterly magazine published on paper in Dutch and French. It is produced by a mixed team of Dutch and French speakers, and based on the journalistic philosophy of author Georges Simenon: “Comprendre, ne pas juger” (Understand, do not judge).

This bike tour will be given in Flemish and English.